The first actively conscious memory of my life occurred when I was nine months old. It was a highly charged experience, filled with insight, anger, pain and pleasure. How accurate are the details of this memory? I can’t be sure; but what I do know, after much thought, is that my recollection feels right. One of the reasons I may remember this experience so well is because my mother retold this story in amazement several times during the first few years after it happened. What makes it worth sharing is how well it illustrates what a defining moment is in our lives. This account also shows how thoughts and feelings interact to form our experience. 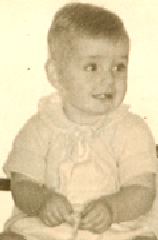 My skin was on fire from my thighs to my chest when I woke up. I had peed at east once during my nap and both my diaper and the front of my T-shirt were soaked with urine. My gums were also sore from teething. Loud voices and outbursts of laughter coming from the next room added to my distress and I cried at the top of my lungs to get attention. Soon, my mother arrived to check on me. Finding me soaked from head to toe, my skin red with irritation, she removed my wet clothes and washed me. After rubbing baby powder on my skin, she dressed me in a clean t-shirt and diaper. What relief! She then picked me up and carried me into the kitchen where the adults were partying. Sitting me on the far side of the kitchen table with my back against the wall for safety and support, she told the adults sitting at the table to keep an eye on me while she went to the stove to prepare cereal and milk for me.

Excited by the people sitting around me and anxious for my food, I pulled my forearms up and started rotating my hands like babies often do while saliva drooled from my mouth in anticipation of eating. Without warning, my father stuffed a sweet hot pepper into my mouth from the bottle on the table. While everyone stared at him in disbelief, I started moving the hot pepper around in my mouth. It was cool and tangy. When I bit into it, it felt mushy and a burst of heat exploded in my mouth. Until that moment I had never eaten solid food. It was always milk, baby cereal or pureed fruit and vegetables. Not only did I enjoy experiencing the feeling of resistance as I chewed the pepper’s flesh, I loved its texture and pickled flavor. And the heat was miraculous because it counteracted the irritation in my gums!

I was in heaven! In delight, I imagined myself floating in the air above the table with each one of my arms and legs wrapped around the neck of each person sitting there. As my consciousness explored this image, I thought about life beyond this one where nothing anyone did could harm anyone else. I laughed at the irony. My father was trying to punish me for disturbing his party and had unwittingly provided me with a great new taste and texture sensation. It was also a great remedy for soothing my irritated gums.

Then another voice spoke up in my mind. It was loud and angry. How dare you put a hot pepper in my mouth? You’re my father and I’m just a baby! You’re supposed to take care of me, not hurt me! What’s wrong with you? Wow, so many judgments and so much anger! In that moment I fully embraced my life as a human being, forgetting all conscious knowledge of inner reality and our connection to it.

My father was forty-five or forty-six at this time, fifteen years older than my mother. She had four boys with him and we were his second family. He died from congestive heart failure when I was four according to his Death Certificate. I learned from my mother and oldest brother, Rudy, that he was an unhappy man. He worked for his father as a grocery store manager and felt weak for never going out on his own. He drank and gambled after work, which explains why we never saw him much.

In the four years I knew him all I remember is how gruff and aloof he was with my brothers and me. He came home for lunch, napped in his rocking chair for five minutes after eating, then he headed back to work. He also had Bright’s disease, a name that serves as an umbrella for several different forms of kidney disease. Nephritis (inflammation of the kidneys) is one and kidney failure is the other. Kidney failure can be brought on by either high blood pressure or fluid retention. In addition to high blood pressure and the threat of kidney failure, my father suffered from sleep apnea. Even though he slept upstairs, I remember many nights when his loud snoring would stop and I’d be on pins and needles, willing him to start breathing again. What I remember most about him is his thin, white, well-manicured mustache, his bushy white eyebrows and the profusion of hair growing out of his ears and nose.

Back to my story: While chewing on the hot pepper and rejoicing in my new eating experience, something kept me from reflecting my inner thoughts and feelings outward.  Although I was beside myself with joy inwardly as I imaginatively floated in the air with my legs and arms wrapped around the neck of each person at the table, outwardly I maintained a blank, noncommittal expression on my face. For some reason, I didn’t want to show how I really felt.

My mother was standing at the stove heating my milk bottle and stirring my cereal, but she had figured out that my father had put a hot pepper in my mouth. She didn’t say anything to him but watched with concern to see how I’d react. And I was reacting.  My father had betrayed the trust that’s supposed to exist between parent and child.  I was not only self-righteously angry at him, I was angry at all the adults sitting around the table for letting it happen. I knew they knew it would burn my mouth. In my baby’s mind, I knew my father meant it to be a big joke at my expense. Well, I wasn’t going to let them get away with it. Still enjoying the pleasure of chewing the pepper, I turned and soberly stared into my father’s eyes until he looked down in shame. I continued to do this with every adult sitting at the table, until every last one of them lowered their eyes.

I wasn’t angry with my mother because I knew she hadn’t become aware of what my father had done until it was too late to stop him. Swallowing the last bit of pepper, I looked over at her to see how she was coming with my food. After testing the temperature of the milk on her wrist, she returned to the table and cast an angry look at my father, before she sat down to feed me.

Getting angry at behavior I considered unfair, unjust or irresponsible became the hallmark of my life after this and lasted for many years. I didn’t let anyone get away with meanness, hypocrisy or irresponsibility, including myself. If I, or anyone else, did something mean or unjust to another person as a parent, teacher, friend, employee, business owner, priest or driver, I remembered it and gave them the silent treatment or some other form of grief. I became judge, jury, and executioner in my own mind for every behavior I considered mean, unfair or destructive. I had become lost in a world of external values and fear, trapped in a world of dependence, uncertainty reaction and vulnerability. Fear is a great inhibitor and I started to armor myself against what I perceived as a hostile world.

It took me years to consciously remember myself as a spiritual being having a human experience. What would the world be like if we all remembered ourselves as spiritual beings creating a human experience? Fear not only saves lives, it destroys them. When we see this one life as all there is, it becomes everything to us. We fear for ourselves and in seeking to protect ourselves, we lose ourselves in life, forgetting our spiritual origins. Fear feeds on fear and, if not dealt with, it can destroy us. Until we understand, or remember, that We Create Our Own Reality, we’ll be more the victims of reality than the creators of it.

How easy is it for us to forget how good we are, how much we do, and how well we do it? How easy is it for us to belittle or dehumanize ourselves and each other when we live in fear and value judgment? It must be pretty easy because many of us do it. In writing about this experience, and others when I was very young, it’s clear to me that we’re all very sophisticated at all stages of our lives and across all cultures and species. It takes a lot of awareness and intelligence to survive. We’re all truly amazing! When we forget this, we open the door to fear, misunderstanding, condemnation, exploitation, conflict and violence.

It is important to remember that we are both one with and separate from All That Is. It is also important to remember that we are not only products of creation; we are creation itself! By learning how to use inner awareness as well as outer awareness, we make it easier to maintain balance in life. In other words, it’s important to keep one foot in inner reality and one foot in outer reality to maintain balance and perspective. Biological existence demands our attention to detail but there’s no need to completely forget who we are to survive in this reality. When we take time to study our dreams and imaginatively look at the world through other people’s eyes, including our own, we can maintain a healthy balance between inner and outer reality, past and present selves. What’s going on in outer reality is the expression of what’s going on inside our minds. As we think, feel, act and react, we create. To change what we create, we must change what we think and feel and how we act and react. (see The Ball of Light – A Lucid Dream About the Nature of Being and Creation).

“How you define yourself and the world around you, forms your intent, which, in turn, forms your reality.” – Seth

Start your own Story Room with ideas from The LifeSong Store!

As Beings of Aware Energy, we are waking up, wising up, and rising up to greater awareness and understanding through the process of Being and Creation.

There is no right or wrong, good or bad; there just IS. There is what we like and don’t like, what works for us and what doesn’t, what makes us happy and what doesn’t, in our oneness with and separation from All That Is – as both products of creation and creation itself.

Nothing you can ever think, feel, say or do can keep you from being unconditional love.