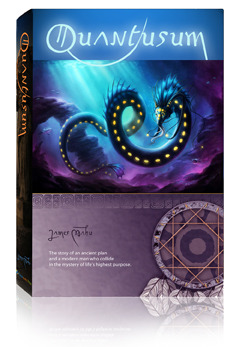 Excerpt from the book, Quantusum, written by James Mahu, Chapter 41: The Seventh Door

(James Mahu has his own unique way of interpreting the nature of Being and Creation. Still, hidden within his preferred form of symbolism is the same message, the path to inner connection and knowing is subtle and personal. “Be still and know.” – Pete)

“What did you mean earlier when you said Sonvertos have an innate access to the Creator’s subtle wisdom?”

Uncle looked away for a short time, glancing at the prairie in the far distance. “Sonvertos are human, as I said, and all humans have the power to communicate with their Creator—and I mean the Creator of their spiritual natures… their immortal souls. Sonvertos incarnate to this world for only that reason. They’re structured to communicate the simplest truths which can then be embodied in behaviors that are aligned with the Creator. They’re not interested in intellectual complexities. They’re not interested in impressing anyone. They simply know, usually at an early age, that they’re in a human body for the purpose of sharing a simple, but vital message.

“The message can come in various forms, but one element that’s consistent is that it’s not owned by anyone. No clubs, fraternities, organizations, none of the usual trappings of a hierarchical system. If you see such a thing, it’s not from the Sonverto, maybe a misguided follower wanting to grab some ego gratification or power, but not a Sonverto. This is how you can tell them apart from the Controllers.

“In my world, we know a good medicine man if he lives in a simple shack, has a good family, is generous with his belongings, and dresses without any pretense even when he performs ceremonies. He never takes credit for his healings or good work because he knows that he’s a conduit of the Creator, the Wakan Tanka and nothing more.

“Sonvertos contemplate the Great Mystery, but more than this, they don’t simply read books and acquire their knowledge from others. They read nature, they read energy, they read the seventh direction.”

Uncle smiled. “Because it’s the one place the Controllers can’t control.”

“Because the seventh direction is the sacred way in which the Creator—the Great Mystery moves into the physical universe. The movement is always one-to-one. Creator to individual. Some people have allowed the Controllers to substitute their own image of a God, in effect, replacing the Great Mystery with the small faith. It’s not so much control as it is a form of magic like a shell game. It’s all about distraction.

“Controllers are very good at two things: one, forming distractions so people grow to be predictable and easy to manage; and two, providing substitutions for the Real that, over time, become real to most people.”

“I don’t understand,” I said, “why don’t people stop them, or boot them off our planet, or seal the passages they use to get into our world?”

Kohana touched my arm gently. “One thing Nammu told you is true; they are a very ancient race. They operate in a different spacetime, and the oldest of our records show them to be our gods… they know all about us, because they’ve created the game in which we play, and they’ve been observing us since we began on this planet. We can’t simply put the genie back into its bottle and toss it into space and wipe our hands of them.

“The Controllers may have created the game that humanity plays, but there is a bigger game being played out than one planet and a collection of races we call humanity. In this bigger game there’re larger players, more at stake, and this is where we focus. We don’t try to battle the Controllers, we honor them and their role, we avoid their distractions, and we withdraw our energy from them.”

“How can you honor them? If they’re anything like Nammu, they’re a bunch of sophisticated thugs and nothing more.”

Uncle cleared his throat as if attracting my attention. “Honor is our word for accept. If we battle them, then we’re trying to control the Controllers. We become like them. We don’t want to control anything, even the seventh direction.”

“But if they’ve created the game,” I asked, “and that game includes war, the destruction of earth’s resources, genocide… is the only option to roll over and let them continue with their evil?”

“It’s not the only option,” Uncle replied, “some will battle the pawns of the Controllers—the human face, but these are not the real Controllers. The real manipulators can’t be battled. They’re invisible. They live out of our reach, so why would we battle their pawns? We can only teach about the seventh direction. That is why we’re here.”

“It sounds so passive…” I whispered.

“It’s passive only when you think in terms of battle,” Kohana said. His tone slightly irritated. “We actively teach. We actively show people how to live aligned to nature. We actively demonstrate how to connect with our Creator. People must have the desire to awaken; we can’t force them to wake up.”

“And where do they get this desire?” I asked. “Everything you’ve said about the Controllers is that they’ve deceived us and kept us distracted. So where do people get the desire to even consider the seventh direction?”

Kohana looked to Uncle with a face of quiet frustration.

“The Creator of our universe is wise, do you agree?” Uncle asked.

“If our Creator is wise,” Uncle said, “does it also make sense that its intelligence would create attractions for the seventh direction?”

“What about the soul?”

“The soul is not distracted. The soul waits.”

“To see what the mind and heart choose.”

“And if they choose the attractions?” I asked.

“And if they choose distractions?”

“The soul waits for the opportunity to show itself. It’s like a man and a mirror in the forest. The man walks a hundred different paths in the forest, and one day he notices some movement in his side vision, and he turns to see a reflection of himself. If he walks a single step one way or the other, his reflection is gone. It is only when the man is in a precise place that he notices his reflection in the mirror.

“This is the way of the seventh door.”

“You changed to door instead of direction,” I pointed out.

“What is this precise place?”

“For everyone it’s different. It’s part of the Great Mystery how the Creator attracts each individual. It can be a dream, a night sky, a person’s story… .” I felt Uncle look deep into my eyes. “It can be a bear… but how it’s done is without formula or a crystallized process. It’s organic, evolving moment to moment, lightly guided, and each step is a preparation.“

Next post: Lifting the Veil ∞The 9th Dimensional Arcturian Council

As Beings of Aware Energy, we are waking up, wising up, and rising up to greater awareness and understanding.

There is no right or wrong, good or bad; there just IS. There is the difference between what we like and don’t like, what works for us and what doesn’t, what makes us happy and what doesn’t, in our oneness with and separation from All That Is – as both products of creation and creation itself.

“Nothing you can ever think, feel, say or do can keep you from being loved unconditionally.” – Unconditional Love